Read All About It! New Orleans English Teacher Steven Gamache Is Surprised with $25,000 Milken Educator Award

Santa Monica, Calif., — Steven Gamache is known for leading efforts to turn schools around, but he had no idea that his life would be transformed today with a $25,000 Milken Educator Award.

During a rousing all-school assembly at Paul Habans Charter School, Milken Educator Awards Founder Lowell Milken and State Superintendent of Education John White bestowed the honor upon the eighth grade lead English Language Arts teacher — along with the news that he can use the cash prize however he wishes.

Gamache is among up to 40 honorees nationwide to receive the recognition during the 2019-20 season.

"Steven Gamache's commitment to rigor, high expectations, and critical thinking through real-life events is preparing students to chart their own paths," said Lowell Milken. "In the process, he instills qualities of character with the potential to benefit not only young people but the future of our nation. Steven's role guiding and supporting fellow educators multiplies his impact and creates a cohesive culture for all to thrive."

Hailed by Teacher magazine as the "Oscars of Teaching," the goal of the Milken Educator Awards is to celebrate, elevate and activate the American teaching profession and inspire young, capable people to join it. The Milken Educator Award is not a lifetime achievement honor. Recipients are heralded while early to mid-career for what they have achieved — and for the promise of what they will accomplish given the resources and opportunities inherent in the Award.

"Louisiana's commitment to maximizing positive outcomes for every child, every day, requires the innovation, collaboration and passion of educators like Steven Gamache," said State Superintendent John White. "We can all learn from his leadership."

"Mr. Steven Gamache is an exceptional educator. We are so fortunate that he is a part of NOLA Public Schools and can serve as an example of excellence to his fellow teachers here and around the country. His impactful work as lead eighth grade ELA teacher at Paul Habans Charter School has helped so many students thrive and achieve at new heights," said NOLA Public Schools Superintendent Dr. Henderson Lewis. "I am thrilled to see Mr. Gamache being honored in this way by the Milken Educator Awards and am thankful for his service to the students and families of New Orleans. I would also like to thank the Milken Family Foundation for taking the time to recognize teachers here in the Greater New Orleans area and across the country."

Gamache's rigorous reading and writing curriculum keeps the bar high for all students, many of whom arrived at Habans from underperforming elementary schools, are English learners or have special needs. Committed to moving all students forward, Gamache pushes students to develop comprehension on grade-level texts while he supports them at their independent reading levels. For English learners, he creates intervention lessons that front-load vocabulary, texts and difficult standards in advance of actual in-class lessons. Gamache is masterful at analyzing student data in the moment and making immediate instructional adjustments that help students grow. The numbers reflect Gamache's dedication. Last year Habans had the highest academic growth of any open enrollment elementary school in New Orleans, and Gamache's cohort went from 55% to 73% in achieving basic proficiency and above. Gamache's highly effective instructional practices helped both Habans and his previous school move from an F to a C rating within just two years.

"Crescent City Schools is so proud of Steven Gamache for earning the Milken Award," said Kate Mehok, founder and CEO of Crescent City Schools. "Steven has been an integral part of the staff at two of our charter schools in our network in New Orleans, preparing eighth graders for the rigors of high school and coaching other ELA teachers to excellence. We are honored to have him as a member of our teaching community."

Innovation: In Steven Gamache's classroom, eighth graders get a taste of what lies ahead after high school. Their whole-class book discussions function like college literature seminars, with students leading the conversations about themes, characters and plot development, and commenting on each other's ideas. Gamache's creative lessons inspire students to dig into real-world applications. He challenged students to retell the myth of Athena and Arachne by changing the setting from ancient Greece to one of their choosing; students normally shy to share their work came alive as they eagerly shared their often-humorous reimaginings of the classic tale. Using "Fast Food Nation" as a supporting text, Gamache asked students to gather evidence for a discussion about the food industry. In Gamache's class, students see that learning goes beyond the classroom and relates directly to their futures as they grapple with real-world issues. Gamache is eager to try new teaching methods, always looking for simple solutions to even the most complex challenges.

Lasting Impact: Most of the students at Habans live within a mile of the building, and many who visit after graduation thank Gamache for preparing them so well for high school.

Education: Gamache earned a bachelor's in English in 2008 from Fordham University and a master's in adolescent education in 2010 from the College of Saint Rose.

More information about Gamache, plus links to photos and video from today's assembly, can be found on the Milken Educator Awards website at https://www.milkeneducatorawards.org/educators/view/steven-gamache.

More About the Milken Educator Awards: "The future belongs to the educated."

The very first Milken Educator Awards were presented by the Milken Family Foundation in 1987. The Awards provide public recognition and individual financial rewards of $25,000 to elementary and secondary school teachers, principals and specialists from around the country who are furthering excellence in education.

Along with the $25,000 financial prize, recipients join the national Milken Educator Network, a group of more than 2,800 top teachers, principals and specialists. The network serves as a rich resource for fellow educators, legislators, school boards and others dedicated to excellence in education.

The 2019-20 honorees will also attend an all-expenses-paid Milken Educator Forum in Indianapolis March 26-28, 2020, where they will network with their new colleagues and exchange ideas with state and federal leaders on the future of education. In addition, the Milken Educator Awards' "Why Not Us" program will pair each 2019 recipient with a veteran Milken Educator mentor to explore and prepare for expanded leadership roles that strengthen education practice and policy.

To get regular updates on the surprise Milken Educator Award events, follow and use the #MilkenAward hashtag on Facebook, Twitter and Instagram. Everyone is encouraged to watch the tour at www.facebook.com/milkeneducatorawards, www.twitter.com/milken, www.youtube.com/milkenaward
and www.instagram.com/milkenfamilyfdn. 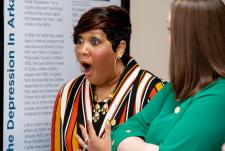 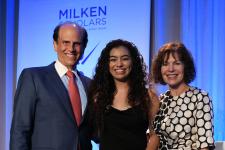 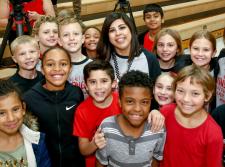