Rounds’ mixed media work “Saved by Science” explores the inventive and courageous efforts of Dr. Eugene Lazowski, a Polish doctor during WWII who risked his life to save thousands of Jews. Dr. Lazowski injected them with a strain of the Proteus bacteria, which made them test positive for Typhus while not actually causing them harm. This manufactured epidemic scared Nazi soldiers away and saved an estimated 8,000 Jews from being sent to concentration camps. 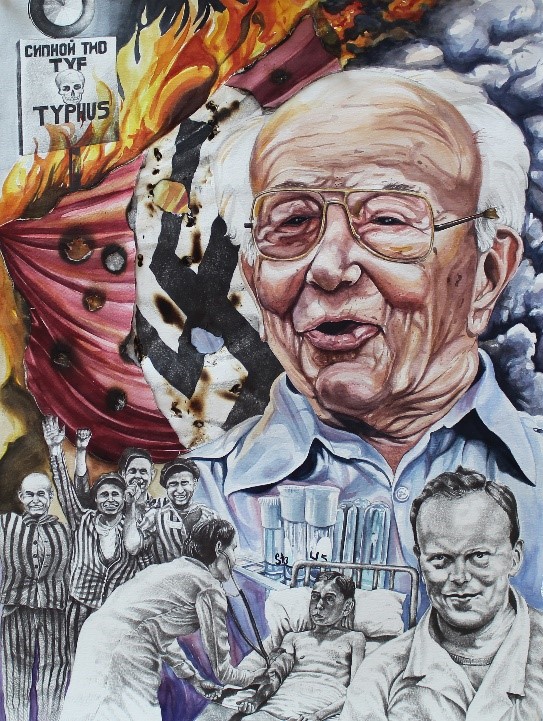 “Like Eugene Lazowski, I want to liberate people through my art,” said Rounds in his artistic statement. “I want them to be at peace with all of the chaotic things that surround them in this world. Similar to the way Eugene used his knowledge of chemicals and medicines to heal the suffering of the Jewish people, I use my art as refuge for those who seek happiness in times of adversity.”

Rounds plans to major in art and architecture next year at Mississippi State University and, upon graduation, focus his talents on helping to revitalize the City of Jackson.

In addition to taking home a cash prize, Rounds, along with the six other winning students, will have his artwork displayed virtually on LMC’s website and physically in LMC’s Hall of Unsung Heroes in Fort Scott, Kansas, a museum and research center visited by thousands of people annually.

Jenny Zhu, a San Diego, California Westview High School 10th grader, received the High School $2,000 Second Prize. She submitted “The Shooting Star”, a fine art profile of Gene Shoemaker, a groundbreaking scientist who pioneered a new branch of planetary science and whose remains are buried on the moon.

The High School $1,000 Certificate of Excellence was claimed by Seraphina Gillman, an 11th grader at Pennington, New Jersey’s Hopewell Valley Central High School. Gillman’s “And I Was Still Determined” is a fine art nod to Sheyann Webb, one of the youngest African American children who protested for civil rights, even marching with Dr. Martin Luther King, Jr.

The Middle School $1,000 Second Prize was given to Marietta, Georgia’s Makena Bryan, an 8th grader at Dickerson Middle School. To spotlight Anna Smith Strong, one of the only female Revolutionary war spies who upended gender roles to serve her country, Bryan made “The First” with mixed media.

The ArtEffect judging panel consisted of LMC’s executive leadership and notable figures in the art design world, including professionals from ArtCenter College of Design, California Institute of the Arts and Scripps College and Pomona College.

Submissions for the next competition season will open early 2021.

The Lowell Milken Center (LMC) for Unsung Heroes was established in 2007 in a partnership between education philanthropist Lowell Milken and Milken Educator Award-winning history teacher Norman Conard. LMC is committed to transforming classrooms and communities through student-driven projects that discover Unsung Heroes from history and teach the power of one to create positive change. To date, LMC has reached over a million students and more than 10,000 schools across America and globally.